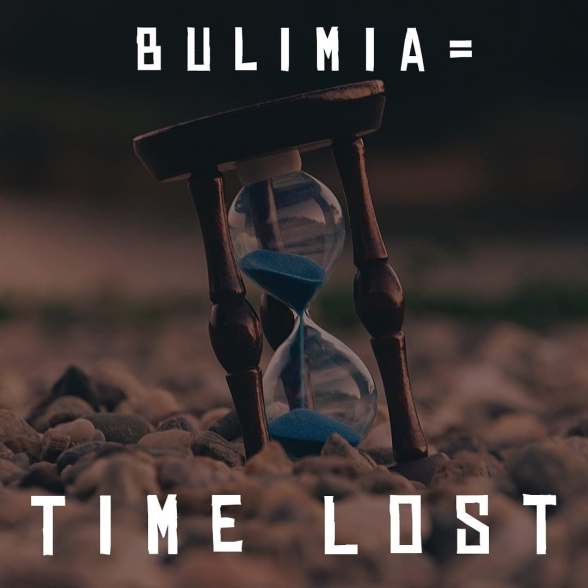 As a bulimic, we are so “engrossed” in trying to make everything work in our lives. We are perfectionists with a cause. To ensure that we accomplish everything on our list of expectations.

What we don’t really understand, for those of us who stuggled for years, is that if you add up all the time we spent binging and purging, we wasted time that could have been so much more valuable.

Why? Because for us, this was time to ourselves. But the “ourselves” was not at all that.

I look back sometimes and think “I still lived a full life, so why beat myself up over all those hours lost?” Reality is that it WAS time lost. Not gained.

I am grateful that today I can get up and live a full life everyday. NO I LIE. Not every day. There are still times when my productivity is low, when I just want to lie in bed and not get up. But I have more purpose now knowing that I CAN kick my own butt and when I am UP I am not in the fridge, I am not looking for the next binge. I am up creating yet a new beginning… every day. Without having to live a lie.

Don’t let bulimia steal your time… we never know how much of it we have left, and bulimia doesn’t deserve to own what is… YOU do though!!

Mastering the art of hiding is one of the skills a bulimic hones. As the bulimic moves on in years, this “mastery” becomes more refined. Over time, the signs that may reveal the eating disorder are known all too well, so the bulimic learns ways to make sure that they are not apparent in his/her life.

To the average person, this would be called “deceit”, and there is validity to this perception. But for a bulimic, it is a way of life to protect themselves from being “found out” and the embarrassment, particularly if one has been struggling for years, of having to admit that something has to be done to stop the deceit. The primary reason for this is that the bulimic is not only deceiving others, but more importantly they are deceiving themselves.

Along with deceiving themselves, they are putting so much at risk. The ability to live a “normal” life, to stop the isolation, the lost time, and the exersion of unhealthy ways on the body.

It’s time to come out of the hiding. It’s time to open up and find the freedom you deserve. It’s time to break loose from the chains that deny you a full and happy life.

A bulimic may master the art of hiding the signs of their bulimia so others will not “see” the real anxiety that lurks in the background, but they can never hide it from themselves.

Reach out. There is support. No matter what age you are. There may be a misconception that the longer you have struggled, the harder it is to recover, but this is a fallicy. It can be done. The key is to seek the support and assistance to accelerate the journey towards recovery. 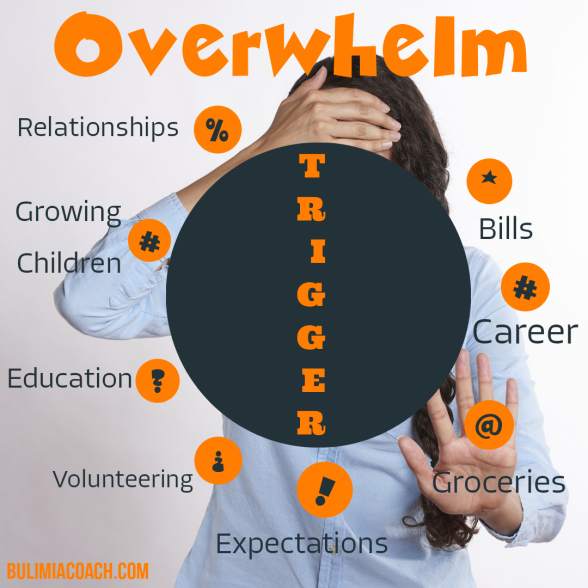 If someone is struggling with recovery from bulimia, overwhelm can be one of the top triggers. With overwhelm comes the constant stress and mental turmoil of getting everything done.

Quite often a bulimic is determined to meet everyone else’s expectations. When someone moves into midlife (40+) there are so many balls to juggle, from growing children, their educational needs, their parental guidance and support, be it getting them to sports, letting them take the car. Insurance, mortgage, bills, etc. Then for some there is the balancing as well with career, volunteering and keeping up with the home chores of cooking and cleaning.

So what happens? You look at your list, and become despondent and instead of completing “everything” you turn to a “break” and that break is the “binge and purge”, somehow seen as a reward, that is anything but.

The truth is, a time out for meditation, or reading, or writing, getting out for a walk or anything other to get your mind off the “food” is what “should” occur. However, by this time, our subconscious is trained and used to the alternative method. The BP method.

These are areas that can be overcome with help. Be it someone who can help you to adjust you schedule to be less overwhelming, to prioritize and set aside the time to ensure what it possible gets done, and what can wait, waits or someone to call on when it just becomes an unbearable “groundhog day” of the “have to dos” playing over and over again in your mind.

You deserve a break. But make it a healthy one.

Eating disorders are not just present in pre-teens and adolescence. Although it has been an issue for many years, the media began to publicize it more in the early 80’s, showing the rise in the number of women and men who acquired the disorder.

Although we would like to think that over time, with all the information and support groups available, that this disorder would have subsided, but in truth it continues to grow.

Keeping in mind that the “frenzy” of articles came out in the 80’s, this would reflect the number of women and men over 40 who are still battling with bulimia. This age group is often passed over and what is also ignored is the fact that at this age, unlike the younger age, they have honed their skills at hiding and creating a false front.

Many will not come out or seek help due to the embarrassment and shame of being over 40 and still struggling.

There is a great concern with this lack of reaching out, as bulimia affects the heart, and as one crosses over 40, there is a greater risk of having a heart attack. There are several other health and emotional issues that become an increased threat as the bulimic gets older.

It is for this reason that my coaching focusses on women and men (yes, the incidences in men is also increasing) over 40, although I do assist all ages. But to me, this is an issue that is often ignored and not given enough attention to.

Reach out to someone. If you are over 40, reach out. It’s never too late to find full recovery, but often it will come sooner and easier with help.